How can today’s students connect to the tragedy that occurred nearly 50 years ago?

In his poem, “They Didn’t Cry,” he recounts a candlelight vigil in remembrance of the tragedy that, even today, is the first thing people associate with the university’s history.

“They walked, 5,000 of them / with candles, mainly quiet / but strangely not saddened,” goes the first stanza of the poem.

“Candles and night make the symbols / of serious shit. Hushed voices, / the odor of grass; they walked slowly. / At the top of the hill, they still / could see themselves,” it goes on.

In the next stanza, “Pagoda and memories: they crowded / a circle, played taps, read / a poem (?) and laid candles.”

I have been lugging this question around for weeks, wearing it on my back like some sack of guilt I didn’t ask for.

I was just amazed at — and I don’t mean to say people were giddy — but people seemed to have no solemnity. It was like they were disconnected.

I found Lawless online and learned he worked for Kent State University News Service from 1970 to 1978, and later as a reporter for the Plain Dealer. He took the job at Kent State hoping to write a book on May 4 — “silly optimism,” Lawless told me. He never wrote it, but eventually published two other books of poetry.

The vigil he describes in the poem took place near the site of the shootings, by Taylor Hall  — “Is Taylor still around?” Lawless, 82, asked me — and mostly students attended. “I was just amazed at — and I don’t mean to say people were giddy — but people seemed to have no solemnity. It was like they were disconnected,” he said about the scene that inspired his poem.

Almost 50 years have passed since the shootings on May 4, and every year the university tries to honor, to learn, to reflect on the disaster that took students too young and too soon. But how do I — a college student and member of a young generation — connect to a catastrophe I didn’t live through? How do I not only sympathize, but understand student protesters of the ‘70s when my unfledged body is not versed in the the Vietnam War? How do I carry a grief that isn’t mine? How do I learn to be sad?

Before coming to Kent State, I had never heard of May 4. Sure, I was born and raised in Ohio, but as a child of immigrants from Ukraine, I grew up confused about my identity, working to earn my familial history. I always wanted to be more Ukrainian, less American and Ohioan. I’ve spent the last year or so interviewing my parents to learn who they were before they came to the United States 26 years ago.

Trying to fathom someone else’s pain isn’t simple; it doesn’t sting in the same way. It wasn’t until I realized sadness was something to discover on my own terms, a personal effort to seriously pursue, that a feeling coursed through me.﻿

Most recently, I’ve been writing an essay about my paternal grandmother, Tatyana, and reflecting on our relationship, which wasn’t a close one. I’ve been trying to understand her paranoia and unpredictability and why she was the way she was. Sorting through my grandmother’s frayed journals, faded artwork and other ancient memorabilia, most of it from Ukraine, has helped me discern how mental illness touched her.

My mother, Irena, sat on the couch about a month ago, reading from a page in my grandmother’s notebook, dated 1980. I sat by her side, my eyes scanning the delicate pages.

“It’s beginning again. Everything is like before,” my mother read aloud. “There’s a rash from my hands to my elbows. I went to the doctor’s twice, and twice, they threw away my analyses. … Life gives me only grief and anguish. I barely leave the house. The vegetables and fruits are rotting the day after I buy them. All of my groceries are covered in a liquidy mold.”

I stayed quiet. Suddenly, a sadness flooded over me. I was getting to know my grandmother in a new, frightening way. I was hearing the schizophrenia bubbling up inside of her. And I was coping with the realization that I would never have the chance to step back in time to be with her, to touch her pale hands, to understand her.

My learning to be sad meant putting in work. Real work — taking the time to sort through keepsakes and talk for hours with my parents — and emotional work, all to eventually arrive at a deeper insight.

I know I am not alone in this. We all experience moments when our loved ones sit us down and give us the things that mean the most. Words that become stories, faded photographs, torn-up recipe books. And there we are, so busy and thoughtless. Listening, but not hard. Not thinking that someday, the people who nurtured us will die, and the stories will gray. When we remember to remember them, to pass the stories onto our own children, we won’t be able to call grandma on the phone and ask about that thing that grandpa always used to say, because grandma will be sick, and grandpa will be long gone. We do this our whole lives, until it’s too late.

Honoring May 4 is the same, in a way.

﻿This record of the past has much less value if young people living today have little awareness of it.

So I sat at a wooden table on the mum eighth floor of the University Library some days, at the humming Starbucks on East Main Street other days, and combed through all things May 4 in search of a story that would connect me to the past, even though this revolving sphere of news and events seem to push me further from it.

I found that story in the library’s Special Collections and Archives, specifically May 4 poetry. I marked my favorite poems and returned to them the next day, the day after that and the day after that. How do you learn to be sad? I repeated to myself. The question struck me, and I knew it was one I wanted to explore. The ending of Lawless’ poem carried an importance, an urgency to grasp a complex sadness before everyone close to May 4 withered away.

In learning it, I returned often to the distance between the May 4 generation and my own. It’s a trauma that isn’t mine. And I asked questions: Did I have a responsibility to bear witness to this trauma, anyway? To be a keeper of history? To pass on the story?

The answer, Lawless told me, was, of course. “Kent is still the touchstone for that [Vietnam] War. Everything that could’ve gone wrong [that day] went wrong. We need to think about what the hell we’re doing,” he said, “and you need take responsibility to get involved.”

A few weeks before, I spoke with Thomas Grace, one of the students wounded on May 4. Grace, a sophomore studying history and political science at the time, was shot in the left heel, and the bullet exited the right side of his left foot. He, too, told me there were lessons to be learned from May 4 and stressed the power of today’s students getting involved in social change. “This record of the past has much less value if young people living today have little awareness of it,” Grace wrote to me. The phrase stuck, and I knew to keep searching for something more. Awareness of May 4 wasn’t enough. The tragedy demanded to be felt.

Chasing change, Grace said, can be difficult and risky, but “ignorance of previous change, and how it was achieved, can be lethal.”

My sadness took work and time and caring. It took calling Lawless on the phone and hearing from Grace and staring at the words carved into the May 4 memorial on campus: “Inquire. Learn. Reflect.” Even that didn’t feel sufficient. Trying to fathom someone else’s pain isn’t simple; it doesn’t sting in the same way. It wasn’t until I realized sadness was something to discover on my own terms, a personal effort to seriously pursue, that a feeling coursed through me.

“We’ve gotta do something in our lives,” Lawless’ voice echoed as I sat in the field near Taylor Hall, the midday sun bouncing off my cheeks, and counted the yellow daffodils beginning to sprout from the cold, hard ground.

I remembered the last thing he told me — a story about his first reporter job. A man hired young Lawless, ill-prepared for the responsibility, and taught him how to be a journalist. “And he said to me, ‘This is not for me. It’s not for you. It’s for the next guy that you teach.’”

I replayed Lawless’ story in my head, and sat in my sadness. It was not automatic. I wanted to be sad. We don’t always need to be so delighted in life. We do that enough. Look around. There is so much to be sad about. Sadness that doesn’t have to break us, but sadness that will teach us. Sadness that is OK to feel. Sadness that reminds us we are human. And if I, a child of immigrants who knew nothing of May 4 until stepping foot on campus, can learn this sadness, so can my peers. 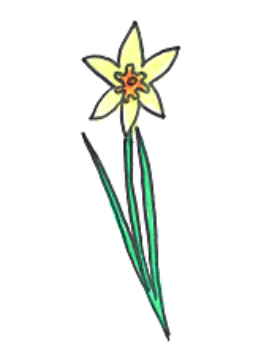